The Many Hats of Agency Life In our line of work, we’re called upon to do a lot of different things that require many different parts of our brains and our skill sets. Anyone who wants to get into advertising needs to know that. If you want to be a copywriter, be ready to paint some old tennis shoes with gold spray paint at some point in your career.

I realize that makes no sense, but bear with me.

By trade, I’m a copywriter. Which means I write a lot of words for print ads and TV spots, radio, brochures and websites. That’s it, right?

Not exactly. There’s a lot more to it than that. For instance, I’ve been part of teams that have had to create sales contests for clients. That means coming up with a theme, figuring out a scoring system that makes sense with what the company tracks, writing up the rules, writing and producing a video to introduce the contest, creating a guide for managers to lead a meeting explaining the contest, and concepting posters and givaways and prizes that make sense within that contest theme and that company. Never took THAT class in college.

I’m pretty handy and have a lot of tools and a glue gun. So I’ve created numerous custom trophies. One of those involved mounting gold painted tennis shoes in an acrylic box.

I’ve had to find a 300-pound professional softball player. Worked with a prop master to create a Rube Goldberg machine for a TV Commercial. Made tiki style walking sticks with a Survivor theme. Customized football helmets. Directed a voice talent on how to properly say, “Ugi laki ugi laki ugi laiki hai!” Driven the camera car. Conducted on-camera interviews for videos. Started fires. Wrangled 75 background extras at once, for three days in a row. Ridden roller coasters. Broke a fake bottle over the head of Cal Ripken, Jr. prior to the season he broke the iron man record. And wore a wrestling mask and a white suit at a client’s event for photo ops.

These are just a few things that, as a copywriter, I’ve been called upon to do or volunteered for. This is not unusual. The point is, everyone here does things you’d never expect. One of our editors created a device to make food fly up for filming. An art director co-piloted an organic waste truck. And an account person had to eat at the same fast food restaurant chain every day for two straight weeks.

That’s what makes this industry, and certainly this agency, so great. It truly is different every day. Sure, it’s many of the same things repeated. But there is also that day where you will put on the bunny rabbit mascot suit at an amusement park so you can get the reaction you’re looking for from a little girl for the TV commercial you are filming at the time. Career highlight #641. 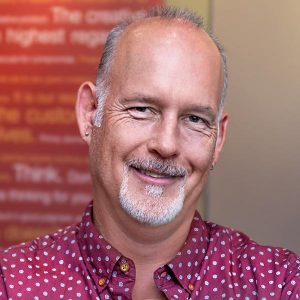