A Weekend Life of an Art Director #2 What do you do on the weekend? Nothing.

These days, hearing “I didn’t do anything this weekend, and it was awesome…” or “Not really anything, but…” sounds like a gift to those that are overwhelmed with busy schedules. I love those opportunist weekends of freedom without a wedding, birthday party, dinner or even a family visit — it’s nothing against any of that, but freedom and solitude are a few of the ingredients I need to flourish creatively on the weekend.

“I did nothing, but…” tends to be our go-to response to when we aren’t impressed by our weekend activities. There is always a “but” that follows, and that twist can turn your “nothing” into an ”11” on the awesome scale. I often receive a puppy-like tilted head look that a crazy eccentric artist-type typically gets when I start the weekend story that jumps my “nothing” to  an “11.” And I’m super cool with that. I love having nothing to do. Because my nothing is never nothing — instead, it is a large chunk of time to play.

The gift from nothing–to-do-type weekends is “brain freedom.” To create something spontaneous and let my imagination run wild, I need nothing on my schedule. No favors. No extra work. No agenda. Experimenting creatively is a source of entertainment for me. When I pull at a thread of an idea on one of these “nothing nights,” my creativity (making stuff), education (learning stuff) and experimentation (playing with stuff) can collide without pressure or direction. It becomes jazz music then — just a free flow of creative energy.

For example, last February, I caught a mouse in my apartment bathtub — it was a baby, and it wasn’t a big deal to do so without harming him. So instantly, we became best friends after dinner together. At the time, I had recently purchased a Fujifilm x100T camera and had been experimenting with shooting macro style photography. So I saw an opportunity to do a photo study on scale with something alive and small. This was a Friday night gift. Obviously, I’m a huge partier, right? Nope. But I do listen to Deadmau5 when I need to jam hard and intensely.  So I threw on some jams and my Beats headphones and decided to build a mini set for the new up and comer DJ Livemau5 to premier on. Naturally. Just shooting the mouse up close wasn’t good enough for me. I needed a story to tell. As an art director, I like composing full images or scenes. Full thoughts that can live in a single frame or be part of something larger. It’s also a challenge. Can I do this? I want to do this — so can I? Sure, why not. I can build a tiny stage for a tiny DJ. And after a few hours of building and shooting, I had sewed that thread into an execution of my original idea. Poof! That’s it. And that’s all that was needed. No real purpose. I hadn’t planned on doing that all night, but I did — because I had the time and brain freedom. Bonuses included: practicing with my new camera, some shooting macro experience, shooting a small animal experience, lighting and constructing a mouse-safe diorama with mini stage and all in a moment fueled by a random idea. All of this happened because I found a mouse. I never got the shot I sketched, but I enjoyed it all. It became very late so I released the mouse outside never again to get the high it had when it premiered as a DJ on its very own stage. (Sad, really.) And for all I know he was eaten by a cat immediately, but for those few minutes, with a human being nice to him, he was able to be a rockstar. Sharing these strange experiences allows me share a side of my creativity that reminds people that I’m an artist. I like to make things with my hands. Creating and constructing concepts calms me — it’s my NYT crossword puzzle. I enjoy it.

Thanks for reading. Pop over to instagram.com/chris_kindrick to connect and catch more of my weekend wackiness. 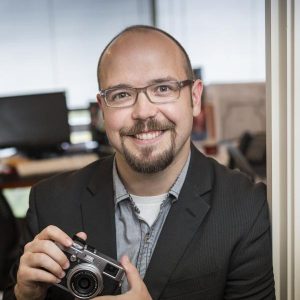