It’s not you, it’s us. Love, Little Rock

While the Amazon HQ2 RFP generated 238 proposals, there was one “thanks, but no thanks,” response from Little Rock that gained national attention. Through an “it’s not you, it’s us” break up letter that ran in the Washington Post (owned by Jeff Bezos), Little Rock politely declined to respond to the request. While unconventional and playful, the approach put Little Rock in the spotlight with features in over 850 media outlets including the Washington Post, Reuters, New York Times and NPR and garnering more than a billion possible impressions at a value of over $2.2 million.

In addition to the Washington Post love letter, a video was created to support the campaign that featured local residents reading the letter and posted on lovelittlerock.org. The video and letter were shared through a strategic social media campaign along with posts, tweets and pictures with reasons to #lovelittlerock. Since the campaign start, the video has received more than 185,000 views, while @LoveLittleRock Twitter handle has generated more than 10 million impressions, and #LoveLittleRock has been used by more than 2,400 people.

This was coupled with an aerial banner that flew over Seattle and Amazon’s Seattle HQ on Monday, October 23, that stated, “Hey Amazon, it’s not you, it’s us.” Little Rock’s response to Amazon with the signature, “Love, Little Rock,” was also the kick-off to the region’s new economic development and branding campaign, which showcases everything there is to love about Little Rock and inviting other businesses to check out all the great things Little Rock and the area has to offer businesses who want to expand or relocate. 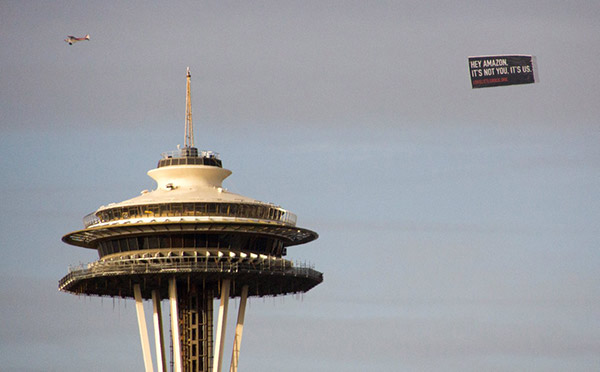 Stone Ward partnered with Little Rock Mayor Mark Stodola and the Little Rock Regional Chamber of Commerce to create this unique approach. The break-up letter, with a bold headline of “Dear Amazon, we need to talk,” outlined the company’s behemoth criteria that Little Rock doesn’t meet, but is really okay without.

The campaign was kicked off with a news conference in the Little Rock Technology Park, home of the renowned VC FinTech Accelerator, created through a partnership between Little Rock-founded global powerhouse FIS and The Venture Center. Little Rock Mayor Mark Stodola and Little Rock Regional Chamber of Commerce President Jay Chesshir encouraged residents to share the many reasons, big or small, they #LoveLittleRock.

Currently, the agency is supporting the campaign by running a paid digital media campaign that is targeting economic developers and site selectors in specific cities as well as continuing to push messages via social media to keep the momentum going and letting the target audiences know Little Rock is open for business. The campaign embodies how traditional paid and digital media can complement each other and gain great results.

Stone Ward has called Little Rock home for nearly 35 years. This city is where we started, and our agency will continue to donate our time, energy and resources to show why we #LoveLittleRock.